Top 4 Brand Partnerships In The Bachelor 2020

Brands Are Looking For Love Too

Still reeling from this latest season finale, it got us thinking about all of the recent brand moments in the series that helped get us to this day! Peter Weber may have had one of the most controversial seasons to date, and we’d love to take minute to recognize the brands that helped him get there.

As one of the most talked about shows in America, The Bachelor is a franchise property that is pure GOLD when it comes to reaching females (and honestly, males too – just ask my husband!) 18+. And it is a branding platform that is becoming more and more sought after as we've seen previous contestants star in commercials, and more branded content crafted around the show.  In this blog, Hollywood Branded examines the brand partnerships and product placement integrations in this latest season of The Bachelor including apparel company Revolve, jeweler Neil Lane, teeth whitener Crest White Strips and gum Orbit.

It’s impossible to miss an in-show integration with The Bachelor franchise, and this one was one of the good ones. It was quite clear that it was a partnership deal, but it was done well, adding to the storyline versus taking away from it. In an episode early in the season, eight contestants were invited on group date, which turned out to be a fashion show sponsored by Instagram’s favorite retailer REVOLVE. An absolute staple of Millennial and Gen-Z women everywhere, the brand is spot on for the show’s demographic.

At the beginning of the date, the women were escorted into a dream closet where they were greeted by some of fashion TV’s royalty, former America’s Next Top Model judge, Janice Dickinson and Queer Eye for the Straight Guy’s Carson Kressley in addition to Raissa Gerona, chief brand officer of REVOLVE. They explained that this group date challenge would require the women to pull a couple of outfits from the closet and compete in a runway challenge with the winner taking home $20,000 worth of REVOLVE clothing.

This partnership is really more than an in-show placement. Former Bachelor Nick Viall said it best when he called this date “meta” on his podcast. The ladies of The Bachelor franchise, racking up hundreds of thousands of Instagram followers while on the show, are notorious for going on to model for REVOLVE after their stints on the series. Many fans commented on how the show was really playing into their own stereotype. As a fan of both, we saw it as a real full circle moment!

Missed it? We got you covered - check the segment out for yourself below!

If you’re a live viewer of The Bachelor, at the beginning of a commercial break during a recent episode you were greeted with a funny branded content piece that Crest 3D Whitestrips ran as a commercial spot. In the piece, which featured series host Chris Harrison, you see him at the Bachelor Mansion applying his 3D Whitestrips, while helping to prepare the house for a date.

We watch as he applies the strips, prepares some romance around the house, and then takes another admiring look at the White Strips box. The spot was posted to The Bachelor's official Instagram account as well. Check it out below!

The linear campaign was also supported digitally with a couple of bloggers, like Mayci J and yummertime, who took to their sites on different Bachelor Monday’s to detail their Bachelor Night Self Care. The blogs, of course sponsored by Crest 3D Whitestrips, credit the strips to helping them get rid of the red wine stains accumulated while watching the show. We hear that!

Continuing the quest for a clean mouth, Orbit also jumped on The Bachelor bandwagon during Peter Weber’s season. Promoted with a quick branded content piece that ran right into a commercial break, the gum brand ran a sweepstakes where you can enter to win a trip to Los Angeles for a live taping of the upcoming season of The Bachelorette. Trying to leverage this campaign to drive sales, one of the two ways you can enter the contest is to upload a photo of your receipt, proving purchase of a pack of Orbit gum. Of course, because it’s illegal for a sweepstakes to require a purchase to enter, if you read the fine print, you can also enter to win by mailing in your contact information.

Taking over the Orbit’s homepage, Orbit acquired the rights to use The Bachelor title artwork to help support this sweepstakes and drive entries. Below is a shot of their website. 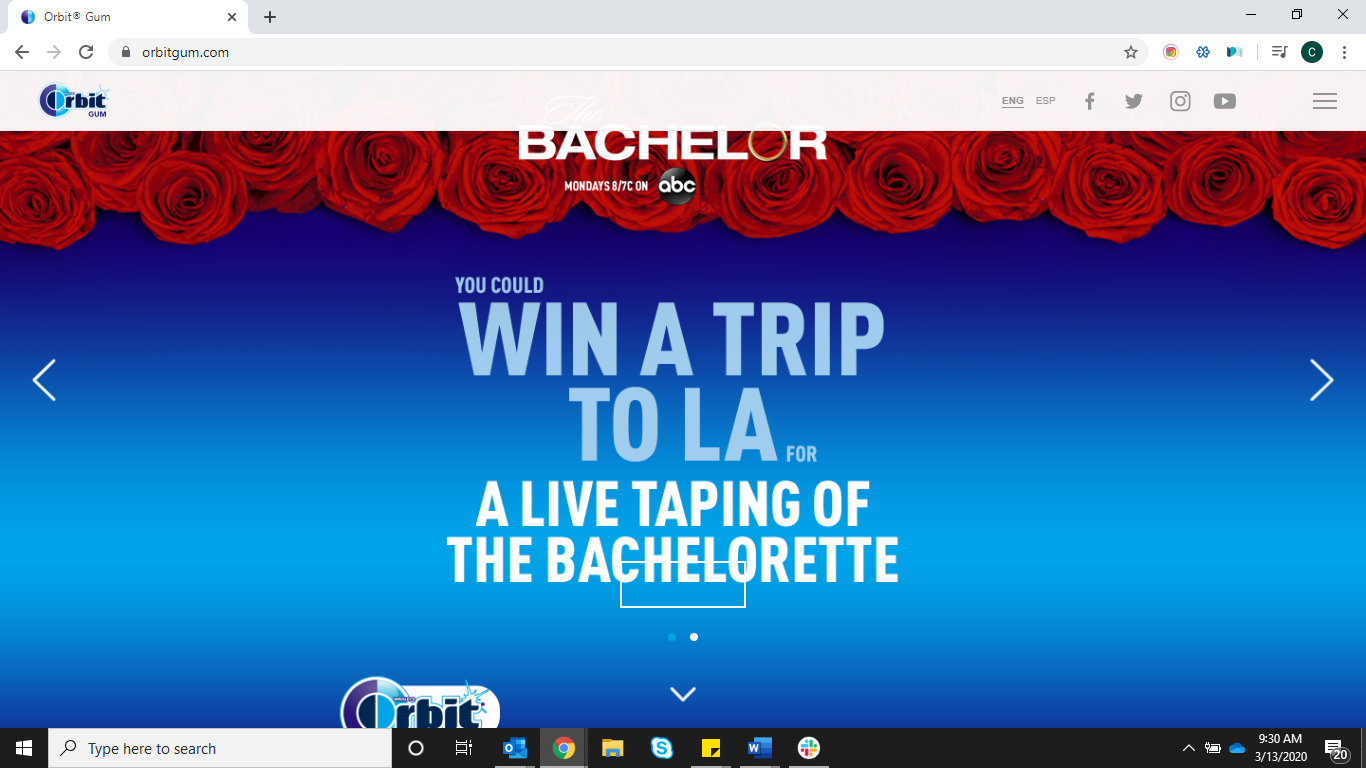 In addition to the spot running on the show, ABC helped to boost awareness of the campaign by posting a series of Orbit-sponsored branded content pieces on the show's Instagram. You can tell from the videos' content that the videos were crafted to be as entertaining as possible.

These are a great example of leveraging show content to boost brand awareness. They're pretty great if you're into Bachelor drama - see for yourself below!

Happy ending or not, it wouldn’t be a Bachelor finale without Neil Lane. Since 2009, Neil Lane has been providing the Bachelors with engagement rings of all shapes, sizes, and designs for the finale proposals. It’s a partnership that has become a staple of the show. In a scene in the finale episode of every show, you get to watch Neil sit with these men, choose the rings, without any idea as a viewer of who the rings will be going to (or coming from if it’s a season of The Bachelorette!).

With rings valued anywhere between $20,000 - $100,000, Neil Lane takes this opportunity to show off some of their best stuff, and rightfully so. According media monitoring service, Critical Mention, in the past seven days alone since this latest finale, Neil Lane has received over 283 media hits valued at almost $5 MILLION dollars!

For the brand, it’s really a steal because while the partnership requires that Neil gifts the rings to the contestants free of charge for the couple, if the couple breaks up within two years or so of the engagement, the ring needs to be returned. And… let’s face it, not many of these relationships make it past six months.

Here's a photo of Neil Lane with Bachelor, Peter Weber.

If you have the steep price tag ABC typically requires and Female 18+ is your demographic, we say BACHELOR NATION. There are some categories like travel (and Neil Lane!) that allow for really great trade out opportunities or at least ways to offset integration costs, however, most other brand categories require both an in-show integration fee and a media buy with the network. If you are a brand that doesn’t typically run linear media, you’re not necessarily out of luck like you would be with some other series or networks. Instead, ABC will work with the brand to construct a digital media buy.  And the branded content they are creating is EXCELLENT.

However, if your brand CAN make the investment, the series is not only one of the highest rates shows, but it also has one of the most engaged audiences out there. It’s a sought after property for a reason, and participating in it will at minimum get your brand talked about like never before.

Have We Piqued Your Interest?

If you found this blog helpful and want to learn more, we have you covered! Below is a quick sample of some of the similar content we have waiting for you!

If you're looking to learn more about this industry, download our pricing guide below.