Studio Properties As A Form Of Product Placement

How Self-Awareness Doubles As Clever Self-Promotion

The times they are a changing, at least as far as product placement goes, and no we're not just talking about the work we do over at Hollywood Branded, and other agencies.  Taking a brand, placing it in a movie - when you think of product placement that is the exact image you get, isn't it? A Coke can in the hands of an A-List actor while they're having lunch, or cracking open a cold Bud Light after surviving an alien robot attack (we're looking at you Transformers: Age of Extinction).

While those overt placements are top of mind there's another level that exists, one that's much more subversive in nature, one that you may not even consider to be product placement in the first place since it's so natural, or in some cases, expected - like in Ralph Breaks the Internet: Wreck-It Ralph 2. So, what exactly are we talking about? Well, we're glad you asked.  In this blog, Hollywood Branded delves into a trend in movies by using studio properties as a form of product placement, and see just how successful this new form of promotion is... 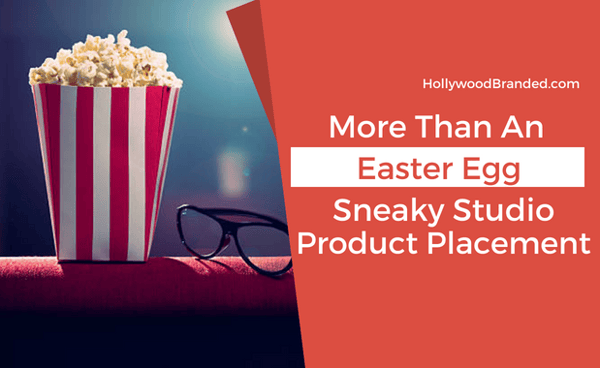 Ralph Breaks The Internet With A New Trailer!

Earlier this month the highly anticipated sequel to Wreck-It Ralph hit the internet (or should we say broke the internet), and wasn't shy with their pop culture references, most notably, in terms of Disney's properties.

Given the Wreck-It Ralph's universe, having references to popular characters of beloved franchises is not new by any means.  With the last film, movie-goers were treated with many video game faces, including - but not limited to - Bowser (Super Mario series), Dr. Robotnik (Sonic the Hedgehog), Kano (Mortal Combat), Dig-Dug, and everyone's favorite dance game Dance Dance Revolution can even be seen in the video game shop, just to further fuel the nostalgia trip.

However, what makes the sequel, Ralph Breaks the Internet: Wreck-It Ralph 2, more interesting is that this time the references are not limited to video games, or limited to older generation video games for that matter. This time, Ralph (played by John C. Reilly) and his spitfire friend Vanellope von Schweetz (Sarah Silverman) take to the vast world of cyberspace, injecting both characters right into the nucleus of current pop culture... or should we say, right into the House of Mouse.

In the trailer the internet is shown as a sprawling city, with personalized hubs for digital behemoths such as Twitter, Cisco, Google, Snapchat, Facebook, and many, many more. When Ralph and Vanellope visit the 'SearchBar' they ask to be directed to a website that is "super intense and really nuts," to which the SearchBar produces one result: virtual Disneyland, with a welcoming banner reading 'Oh My Disney'.

Really, what else would cyberspace Disney be other than a massive theme park?

And of course everyone's favorite debby-downer donkey, Eeyore, from Winnie the Pooh - who responds with an unenthusiastic "Heyyyyy" to Vanellope's prior comment, "Come on. Princesses and cartoon characters? Barf!"

Oh Vanellope, there's more to Disney than just that...

Approximately .5 seconds after voicing her dismay, Iron Man zooms through the frame in a ball of rocket fire, and the camera pans to follow his journey, revealing the epicenter of virtual Disneyland, where the most references can be seen - we'll get into that in a bit.

Next, Stormtroopers from the recent Star Wars installments, immediately try to apprehend Vanellope and chase her through the bustling crowd. Vanellope uses her glitch/teleportation ability to hide in a restricted room, bringing her face to face with all the Disney princesses in their 'off-screen' hangout - and some self-aware princess trope jokes are made. Also, fun fact: the princesses are voiced by their original voice actresses (where possible) - Disney really is the place where dreams come true.

The trailer ends with the pair meeting Yesss (voiced by Taraji P. Henson), the main algorithm of the website “BuzzTube.” You can guess what two online sites this character is the face of, and is in reference to.

From what we can deduce of their brief conversation, it sounds as though Ralph might go to extremes to literally break the internet at some point in the movie, since they debate whether or not that phrase or “wreck” works better for him or not. Yenno, Wreck-It Ralph, but break the internet is a hot tagline so, we'll see what happens there come Thanksgiving. Save the date!

Oh (My) Disney - What Many Properties You Have!

There's one shot in particular during the trailer that serves as the 'big reveal', letting Disney flex their muscles a bit (if only for some well-deserved bragging points) to showcase ALL the things they own under one roof, so to speak.

If you pause at this frame it makes for a really fun Disney easter egg hunt (meaning: an intentional inside joke or reference to another work) which we'll break down for you below...

When it comes to easter eggs, Disney reigns supreme by giving subtle nods to other properties in their movies, and even their theme parks! So, it's no surprise there are multiple to be found in the upcoming movie.

Hollywood Branded played a quick game of "Name as many Disney references as you can" and we came up with quite a list from this single shot. Again, moving left to right we spotted:

If that's all the eater eggs we spotted in a single frame, imagine what a few scenes taking place in 'Oh My Disney' will have...

Self-Promotion As The New Product Placement

Remember earlier we were talking about product placement? The question now is how does product placement correlate with self-promotion tactics, like in Ralph Breaks the Internet? Really, the answer is quite simple. Each and every reference in the trailer, whether it be the Twitter tree branch of the company's blue bird icon brought to life, or a Tie fighter zipping through the frame all counts as product placement, but, in the case of the Tie fighter, it serves as a dual purpose.

Product placement, by definition, is the practice in which brands gain exposure for their products by featuring them in content including film or television. The goal is for a brand's product to be recognized by its consumers in a popular form of media, the exposure ups brand awareness, and in turn, helps drive sales since the product will be top of mind - more recognizability, the more likely someone will see that particular product, and purchase it.

More recently, large brands (such as Disney, yes, Disney is a brand) have been utilizing their own self-produced content as a major platform for product placement. In these cases the products being placed, and ultimately boosted, are their own properties (I.E. the Disney princesses, Star Wars, Iron Man, Pixar, etc.) To break it down further, during that pivotal shot in the trailer where we spotted all the easter eggs, those are products that have been purposefully placed to boost awareness, and in turn, make consumers more likely to purchase said products due to recognizability (and in Disney's case, loyalty over many years, to the brand).

Mind blown? Us too. It's product placement-inception, and it's been proven to work. But before I get into that, for more examples of product placements check out these blogs, where Hollywood Branded recounts first hand our experience with these popular placements!

If you're a movie frequenter such as we are over at Hollywood Branded, guaranteed you've seen this tactic before, perhaps not to the same extent, but still, similar nonetheless. The concept of easter eggs in movies or television (and video games) has become increasingly popular over the past few years, and now, they're marketable.

Ready Player One, which was released earlier this year back in March, operates on the basis of finding Easter eggs, and leverages popular references as subtle nods to both their own studio properties (Warner Bros.) and other affiliates such as Universal Pictures and 20th Century Fox. Another interesting point, both studios are ones Ready Player One director, Steven Spielberg, has good rapports with - most notably, for his work on movies such as Back to the Future (Universal), Jurassic Park (Universal), and more recently The Post (20th Century Fox). The majority of whom worked in association with Spielberg's company Amblin Entertainment in one capacity or another.

Getting back to business, we sifted through the best easter eggs (AKA most iconic) in Ready Player One just to see what scale the subtle self-promotion operated on. And we came across a minefield of references both in terms of pop culture.

There's many, many, more - but those were our favorites, and best when it came to most iconic easter egg characters/movie references.

Okay, but, how awesome was this? Answer: very.

The Changing Landscape Of Product Placement

Now more than ever movie-goers crave and love a good ol' nostalgia trip, whether it's seeing the Millennium Falcon propelling into hyperspace, or the Iron Giant shooting lasers out of his eyeballs a la Superman heat vision - studios hear the demand loud and clear. These subtle (and obvious) references not only serve to cater to the nostalgia hype train, but also help bolster studio's rapport with their audiences, by flexing their properties and beloved characters they brought movie-goers in the first place.

All in all, it's a win-win on both sides of the industry.

And our bet is that you are going to be seeing even more movie-marketing-other-movies in the future, just like Zootopia did by advertising Disney's Secret Life of Pets with a movie poster billboard on the back of a bus!  Read more about partnership in our blog: Real World Product Placement In Zootopia

Check out our video on how your brand can become involved in product placement in movies and TV shows below!